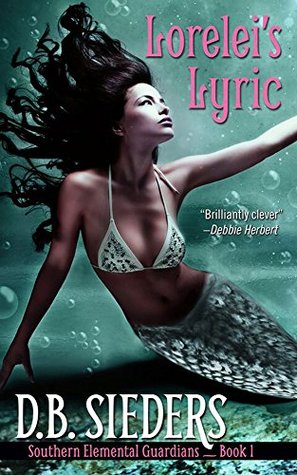 I’m thrilled to welcome my friend D.B. Sieders to my blog today. D.B. and I met while we wrote for the same publisher a few years ago, and we’ve been cheering each other on ever since.

Her contemporary romance Red Shoes for Lab Blues hit all the right notes for me, and I can’t wait to dig into this next book of hers, this time a fantasy romance.

Here’s D.B. with a spotlight on her first indie release (YAAAAYYYYY!!!!!!):

I am so delighted to be here with Jessi Gage, purveyor of Scottish delicacies of the Hot Highlander variety and one of my favorite authors! She’s been kind enough help me spread the word about my new fantasy romance series. Supernatural creatures featured in conventional paranormal/fantasy romance are usually male and are often more powerful (at least initially) than their heroines. My heroines hold their own and take charge—often they are the supernatural creatures paired with mortal males, as is the case with the mermaids in Southern Elemental Guardians.

Yet at heart, these mythical maidens crave love and acceptance in much the same way as mere mortals.

Why mermaids? Well, why not? They’re beautiful, intriguing, and mysterious. They are associated with death, luring unsuspecting mortals to a watery grave. Yet they’re also known as healers. That dichotomy fascinated me. The fair maidens of the sea have had their share of page and screen time, but I hadn’t encountered much about their freshwater cousins. From the legend of Melusine the Warsaw Mermaid, to Lorelei of the Rhine, Ondine, and Wagner’s Rhinemaidens, European folklore is rich in source material. I blended all of these legends, put in my own unique spin, and voilà, my mermaids came alive!

A sexy, wounded rock star, a giant talking catfish, a host of powerful elemental guardians, and a killer soundtrack round out this modern fairy tale for grown ups!

If Lorelei sings, someone will die.

Her beautiful voice once cost a life. Still, music is her passion. What’s a mermaid to do? Run off and live vicariously through mortal musicians!

Unfortunately, gorgeous rocker Vance Idol almost succumbs to her siren call after his show in Nashville. Not that Vance cares—not since his girlfriend’s fatal overdose left him with a supersized death wish. Lorelei makes it her mission to undo the damage and help this talented and charismatic man on the eve of his band’s big break.

But saving a mortal man is a dangerous proposition. Lorelei could far too easily lose her heart, and quite possibly her immortality, during her American holiday. Bad boy Vance might be worth the risk.

Can their love survive his attitude, her fins, and an evil Pixie with a grudge against them both?

Buy link: Available from Amazon in eBook and paperback formats.

The woman didn’t flinch, but her gaze turned hard and held his without faltering. “You didn’t, Vance.”

“I didn’t what? By the way, what’s your name, sugar? Guess it must’ve slipped my mind since last night,” he added, smirking.

“I’m called Lorelei,” she said as she stood, forcing him to take a step back lest she knock him over. “And what you didn’t do was ask me nicely, but it doesn’t matter. You won’t find your phone, clothing, or the means to leave until I’m sure you’re fully healed.”

He maintained his glower but found himself at a bit of a loss. Though she was tall for a woman, he still outweighed her by at least fifty pounds of muscle. Most men he’d faced down during his time on the road would have cowered, but she clearly didn’t fear him.

Since he couldn’t persuade her by fear, he shifted tactics again, reverting to his preferred method of persuasion when faced with a difficult woman. It hadn’t failed him yet. He allowed his gaze to wander down her face to her full lips, and from there down along the slender column of her neck. Her audible swallow and the bob in her throat made him smirk with satisfaction. When his gaze fell to the swell of her breasts, he grew hard again and knew she’d read the heat in his gaze when it returned to her face.

He definitely saw heat in hers.

He moved past her, taking care to brush his skin against her bare arms, and sat down on the bed. He reclined and stretched his body, allowing the towel that covered his lower half to come loose. Plastering a smile on his face, one that charmed most women right out of their panties, he said, “Well if you really want to make sure I’m healed, Lorelei, I guess you’d best get on with your examination.”

D.B. Sieders was born and raised in East Tennessee and spent her childhood hiking in the Great Smoky Mountains, wading barefoot in creeks, and chasing salamanders, fish, and frogs. She and her family loved to tell stories while sitting around the campfire.

Those days of frog chasing sparked an interest in biology. She is a working scientist by day, but never lost her love of telling stories. Now, she’s a purveyor of unconventional fantasy romance featuring strong heroines and the heroes who strive to match them. Her heroes and heroines face a healthy dose of angst as they strive for redemption and a happily ever after, which everyone deserves.

Want a chance to win some gorgeous custom mermaid jewelry?

Rest assured, your email address is safe from third parties and will remain confidential!

USA Today Bestselling Author Jessi Gage is addicted to happy-ever-after endings. She counts herself blessed because she gets to live her own HEA with her husband and children in the Seattle area. Jessi has the attention span of a gnat…unless there is a romance novel in her hands. In that case, you might need a bullhorn to get her to notice you. She writes what she loves to read: stories about love. Leave a comment to introduce yourself! There is no better motivation to finish her latest writing project than a note from a happy reader! Don't forget to sign up for Jessi’s newsletter so you’ll never miss a new release. Thanks for visiting!
View all posts by Jessi Gage →
This entry was posted in Uncategorized. Bookmark the permalink.

6 Responses to Spotlight on Elementals